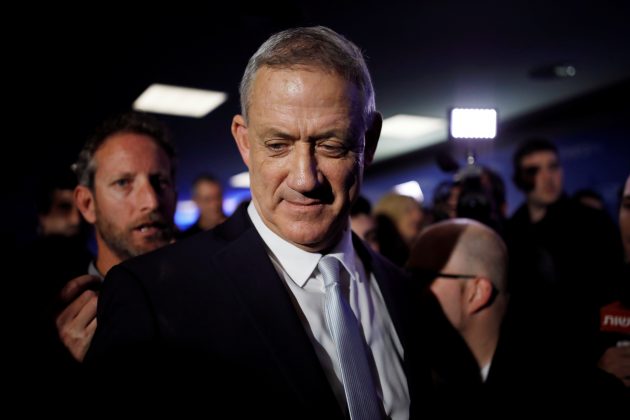 JERUSALEM (Reuters) – The centrist Blue and White party posing the biggest election challenge to Israeli Prime Minister Benjamin Netanyahu pledged a policy of “separation” from Palestinians in occupied land on Wednesday, but stopped short of backing their goal of statehood.

However, the party’s number two, former finance minister Yair Lapid, predicted that parting ways with the Palestinians would eventually lead to them having a state of their own alongside Israel.

Netanyahu and fellow rightists have cast themselves as blockers of any initiative to cede territory to the Palestinians.

Blue and White, led by former armed forces chief Benny Gantz, has hedged on the issue for weeks as it gained ground in opinion polls ahead of the April 9 election.

In its inaugural platform, published on Wednesday, Blue and White said that once in power it would confer with Arab states “and intensify the process of separation from the Palestinians, while ensuring an uncompromising commitment to Israel’s national security”.

The policy blueprint envisages Israel retaining control of the Jordan Valley and blocs of Jewish settlements in the West Bank but remains hazy on what might be done with more isolated outposts in territory captured in the 1967 Middle East war.

Pressed on this, Lapid told Israel’s Ynet TV: “I believe that, in separating from the Palestinians, we will ultimately arrive at two states. But no responsible politician would get into details before the Trump plan is presented.”

Asked if Lapid’s remarks reflected Blue and White policy, a party spokeswoman said she could not elaborate on the platform.

Opinion polls give Blue and White around 35 of parliament’s 120 seats against 30 for Netanyahu’s Likud party.

“What does he (Lapid) mean by a state?” asked Wasel Abu Youssef, an official in the umbrella Palestine Liberation Organization.&nbsp; “We want a Palestinian sovereign state on the 1967 borders, with East Jerusalem as its capital, empty of settlements, with territories that are connected, not isolated.”

In 2009, pressured by the Obama administration, Netanyahu said he would accept a Palestinian state under several provisos. But with U.S.-sponsored peace talks stalled since 2014, he has shifted tone, vowing never to uproot West Bank settlements.

“A Palestinian state would endanger our existence,” the prime minister said in speech last month. “This is what they (Gantz and Lapid) are planning to do. They obscure it. They hide it.”

Most world powers deem the settlements illegal and support independence for the Palestinians, who want statehood in the West Bank and Gaza Strip, with East Jerusalem as their capital.

Israel pulled settlers and soldiers out of Gaza in 2005. It annexed East Jerusalem after the 1967 war, in a move that has not won international recognition, and regards all of the city as its capital. Blue and White echoed this position in its platform.