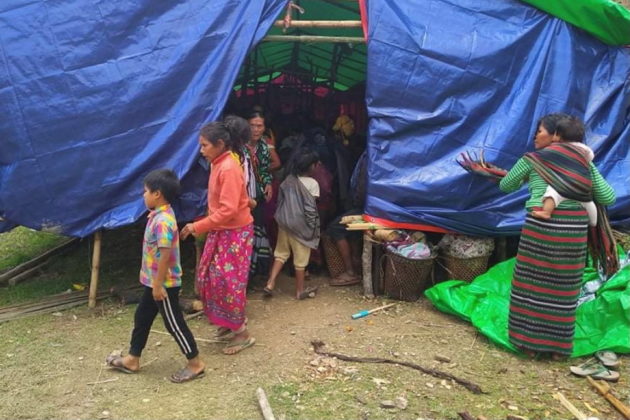 People displaced by fighting in north-western Myanmar between junta forces and anti-junta fighters are seen at a camp in Chin State, Myanmar, May 31, 2021. REUTERS/Stringer

(Reuters) -Pro-democracy demonstrators took to the streets in towns around Myanmar on Tuesday to denounce the country’s military, marking four months since it ousted an elected government and unleashed a wave of nationwide anger.

Despite a bloody crackdown by security forces, Myanmar’s military is still struggling to impose order amid protests and strikes, and fighting on multiple fronts in border regions as civilians take up arms against the junta.

Protests took place in the south in Luang Lone, several areas of the Sagaing division including Kale and Monywa, and the commercial hub Yangon, according to images carried by mainstream and social media.

“This is not over yet. We still have our turn,” read a sign carried by one protester.

Schools officially reopened across Myanmar for the first time since the Feb. 1 coup, but turnout was low due to security concerns and a boycott over the junta’s suspension of tens of thousands of teachers opposed to its rule.

Security forces have killed 840 people since the coup, according to figures from activists cited by the United Nations. The junta says about 300 people have died.

The military, known as the Tatmadaw, says it seized power because of fraud in a November election won by Aung San Suu Kyi’s ruling party.

The state-run Global New Light of Myanmar newspaper carried a quote from junta leader Min Aung Hlaing on Tuesday saying the current crisis was caused by “dishonesty of democracy” in the election, under a large headline that said “Tatmadaw values democracy”.

The military’s use of lethal force against its own people has caused outrage among western countries, and concern among its neighbors. In April, the Association of Southeast Asian Nations (ASEAN) announced a five-point consensus towards resolving the crisis, though no timeframe was agreed.

But four diplomatic sources have told Reuters that the chair and secretary-general of ASEAN are planning to visit Myanmar this week, to meet junta leaders, among other stakeholders.

It was not clear if they would meet detainees or members of a shadow unity government formed to challenge the junta and undercut its efforts to gain international recognition.

The unrest has taken a heavy toll in the countryside, where clashes between Myanmar’s well-equipped military and ethnic minority armies or newly formed People’s Defense Forces have displaced tens of thousands of people.

On Tuesday, a local aid group said 8,000 people were in camps having fled the town of Mindat in Chin State, which the army took control of last month after days of clashes with militias armed mostly with hunting rifles.

The people’s militias have stepped up ambushes in recent weeks on troops in Kayah state bordering Thailand, where witnesses said fierce fighting and retaliatory shelling and air strikes had taken place late on Monday in the town of Demoso.

A resident shared video and images with Reuters of soldiers he said were killed in Demoso late on Monday. He said he saw six bodies and residents had counted 20.

The Karenni Nationalities Defense Force said on its Facebook page that 80 army soldiers had been killed on Monday, while one of its fighters and a civilian were also casualties.

Reuters could not verify the information and a spokesman for the junta did not answer calls seeking comment.

Myanmar state television made no mention of the Demoso unrest in its nightly news bulletin.

Fighting in Kayah has displaced about 37,000 people in recent weeks, according to the United Nations. Many have fled into jungles and are in need of food and medicine.

The Elders, a group of former national leaders founded by the late Nelson Mandela, on Tuesday called on the international community, including ASEAN, to turn up pressure on the junta.

“Myanmar is currently on a dangerous path towards state failure,” its chair, Mary Robinson, said in a statement.

“Allowing the coup to succeed through inaction and disregard would further undermine the international rules-based order upon which global stability depends.”