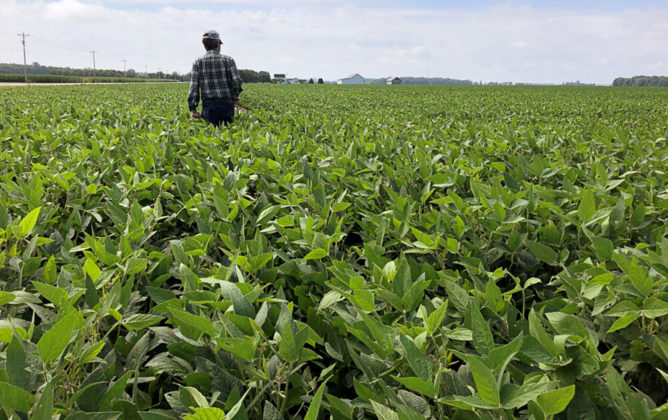 By P.J. Huffstutter and Tom Polansek

ROCHESTER, Minn./CHICAGO (Reuters) – American farmers helped elect President Donald Trump in 2016 on hopes he would shake up Washington and turn around a struggling agricultural economy, but many of his policies have actually stung farmers, notably his trade war with China and biofuel waivers for oil refiners.

Many farmers are angry, and some are directing their anger not at the Republican president, but at Washington’s bureaucracy.

Trump has faced backlash from agricultural groups, ethanol producers and Midwestern politicians upset that his trade war with China has slashed export sales of U.S. soybeans and other crops. Also, Corn futures tumbled after the government forecast a big crop when a flood-ridden spring stalled plantings. Corn-based ethanol plants shuttered after the administration granted waivers to dozens of exempting oil refineries.

Yet polls show that while Trump’s support in farm country has slipped, it remains substantial.

Instead of directing their anger at Trump, dozens of farmers interviewed by Reuters blasted the U.S. Department of Agriculture (USDA) and other Washington institutions they believe are thwarting his true agenda. Unsubstantiated conspiracy theories involving USDA staff are circulating in farm country and gaining traction online.

USDA did not respond to Reuters’ questions on Monday.

Farmers are struggling with how to emotionally process their pain from the Trump administration’s policies, and anger at the USDA may be a coping mechanism, said Ted Matthews, a Minnesota psychologist who has spent 30 years counseling farmers and rural residents across the Midwest.

“The question I hear from farmers who voted for (Trump) is, ‘We believed him when he said he would help make the farm economy better, that we could save our farms. Now, who do we blame?'” Matthews said.

Many farmers told Reuters they intend to support Trump again in his re-election bid in 2020.

“It’s much easier to be angry at a faceless Washington bureaucracy than at the man you voted for,” said Jere Solvie, 69, grain and hog farmer from west-central Minnesota who voted for Trump and still supports him.

Ahead of Democratic nominating contests, that party’s presidential candidates have been campaigning hard in Iowa and other Midwestern states where farms have lost billions of dollars in crop sales to China.

Trump’s approval rating was 71% as of Aug. 23, down from 79% in July, according to trade publication Farm Journal Pulse’s poll of 1,153 farmers.

Of the farmers who supported the president, 43% said they “strongly approve” – down 10% from July and the first time the number fell below 50%. The farm journal’s poll came as ethanol groups complained that demand was decimated when Trump’s Environmental Protection Agency granted biofuel waivers to dozens of refineries, saving the oil industry hundreds of millions of dollars.

The USDA is a natural scapegoat and a topic of conspiracy theories among farmers suspicious of its sprawling bureaucracy, career employees and its research who sometimes conflicts with what they see on their own farms.

One farmer, enraged by the USDA’s corn crop estimate, threatened an agency employee last month. The threat of violence prompted USDA to pull all staff from a privately run crop tour that surveys Midwest crops.

This is a sharp contrast to the early days in the administration when Agriculture Secretary Sonny Perdue was a reliable point person. His folksy southern charm and his appeals to patriotism helped sell Trump’s policies to farmers, even the trade war.

But Perdue’s honeymoon in farm country has ended. Farmers booed the agriculture secretary in Minnesota last month after he joked: “What do you call two farmers in a basement? A whine cellar.”

“He’s supposed to support us, especially during times of distress,” said Gary Wertish, a fourth-generation Minnesotan who farms 500 acres of corn, soybeans and navy beans, and heard the remarks in person.

Grain farmers were already furious that corn futures prices <Cv1> posted their biggest drop in three years after USDA estimated a bigger-than-expected crop on Aug. 12, despite floods that slowed planting.

Market analysts said farmers have more of a localized view on crop health and are often skeptical of the national focus of USDA forecasts.

Trump voter Byron Heppler, a soybean and corn farmer from Calhoun, Kentucky, said he is open to considering other Republican candidates if any emerge. He said he believes USDA’s research methods are flawed and he feels its employees want to unseat Trump, although he offered no evidence to back up those views.

Other disgruntled farmers have also alleged, without offering evidence, that federal agriculture employees are overestimating corn plantings as part of a plot to hurt Trump in the 2020 election. These farmers said they believe USDA employees are upset the administration is relocating hundreds of economists and other researchers to Kansas City from Washington.

The agency has stood by its forecasts, saying they are in part based on surveys of thousands of farmers. On Trump’s order, the agency has rolled out $28 billion in trade aid support for farmers over the past two years.

Wes Hitchcock, a corn farmer and Trump supporter in Sparks, Nebraska, wrote a 1,700-word paper titled “USDA vs. Trump” and has repeatedly posted it on Facebook in a grain market discussion group with 13,000 members.

Hitchcock said he was unable to plant about 30% of the 2,200 corn acres he had planned to grow because of heavy rains this spring. The corn he did manage to plant is not looking great, either, he said.

“I’m going bankrupt and everybody else will this year too,” he said in a phone interview with Reuters.

“To think the USDA deliberately is skewing numbers to make their boss look bad and that people appointed by the president allowed this to happen is delusional,” wrote a user named Zach Alger from Palmyra, Pennsylvania.