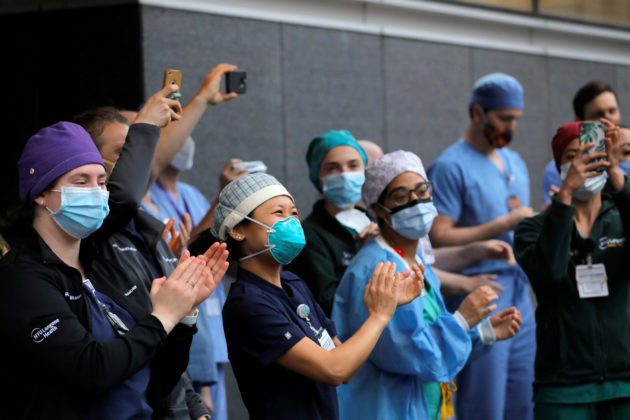 Healthcare workers react as people clap for them on National Nurse Day outside NYU Langone Health during the outbreak of the coronavirus disease (COVID-19) in the Manhattan borough of New York City, U.S., May 6, 2020. REUTERS/Andrew Kelly

(Reuters) – More than 3.79 million people have been reported to be infected by the novel coronavirus globally and 263,682 have died, according to a Reuters tally as of 1427 GMT on Thursday.

* For an interactive graphic tracking the global spread, open https://tmsnrt.rs/3aIRuz7 in an external browser.

* For a U.S.-focused tracker with state-by-state and county map, open https://tmsnrt.rs/2w7hX9T in an external browser.

* Russia’s cases overtook France and Germany to become the fifth-highest number in the world after a record daily rise. Moscow’s mayor said the real number of cases in the capital was more than triple the official, TASS news agency reported.

* Restrictions in Moscow have been extended until May 31, said Mayor Sergei Sobyanin.

* Black people and men of Bangladeshi and Pakistani origin are nearly twice as likely to die from COVID-19 than whites, even when adjusting data for deprivation, a British report said.

* Poland plans to test 1,000 miners a day at drive-through sites as data show rapid growth in new cases in the coal region.

* German officials warned the crisis is far from over despite the country slowly reopening its economy.

* After standing empty for two months, Greece’s ancient sites, including the Acropolis hill, will reopen to visitors on May 18, authorities said.

* A European coalition is forming around an approach to using smartphone technology to trace infections that, its backers hope, could help to reopen borders without unleashing a second wave.

* The first immigrant in U.S. detention has died of the coronavirus, local health authorities said as infections steadily climbed among the country’s around 30,000 immigrant detainees.

* Indigenous groups from nine countries in the Amazon basin called for donations to help protect 3 million rainforest inhabitants, vulnerable because they lack adequate access to healthcare.

* Brazil, one of the world’s emerging hot spots, registered a record number of cases and deaths on Wednesday, prompting the health minister to flag the possibility of strict lockdowns in hard-hit areas. President Bolsonaro’s spokesman has tested positive and is quarantined in his home.

* Argentine President Alberto Fernandez is rising in the polls on approval of his handling of the response, as he faces off against creditors with a major debt revamp.

* Colombia has removed the contact-tracing feature in its official coronavirus app after experiencing glitches, but aims to rebuild it using potentially more reliable technology.

* At least 47 residents and three workers have been infected at a retirement home in Mexico, in one of the biggest outbreaks yet reported in the country.

* A war of words broke out between Costa Rica and El Salvador after the Salvadoran president accused the other country of massaging statistics by deliberately carrying out fewer tests.

* China said it supports the WHO in trying to pinpoint the origins of the pandemic and accused the U.S. Secretary of State of lying in his attacks on Beijing.

* Japan has approved Gilead’s remdesivir as a treatment for COVID-19, the health ministry said, making it the country’s first officially authorized drug for the disease.

* Cases in India rose past 50,000 on Thursday, with the pace of new infections showing no signs of abating despite a strict weeks-long lockdown.

* India will roll out a version of its coronavirus contact-tracing application that can run on Reliance Jio’s cheap phones, as it looks to widen use.

* Iran is scrambling to buy millions of tonnes of grains to shore up reserves, officials and traders said, despite the president’s assertions that the coronavirus would not endanger food supplies.

* Pakistan’s lockdown will be lifted on Saturday, its prime minister said, despite the number of cases still accelerating.

* The head of the Africa Centres for Disease Control and Prevention rejected the Tanzanian president’s assertion that tests it supplied are faulty.

* The IMF has approved 50 requests for emergency aid for a total of about $18 billion, and is continuing to work quickly through remaining requests, IMF spokesman Gerry Rice said.

* Millions more Americans likely sought unemployment benefits last week, suggesting a broadening of layoffs from consumer facing industries to other segments of the economy and could remain elevated even as many parts of the country start to reopen.

* The Bank of England said Britain could be headed for its biggest economic slump in over 300 years and kept the door open for more stimulus next month.

* Sweden will not provide state aid to companies paying dividends to shareholders and could claw back funds from recipients that have already done so, the agency charged with disbursing the emergency support said.

* Border controls, lockdowns and flight shortages are making illegal drugs more expensive and difficult to obtain around the world, the United Nations Office on Drugs and Crime said in a report published on Thursday.