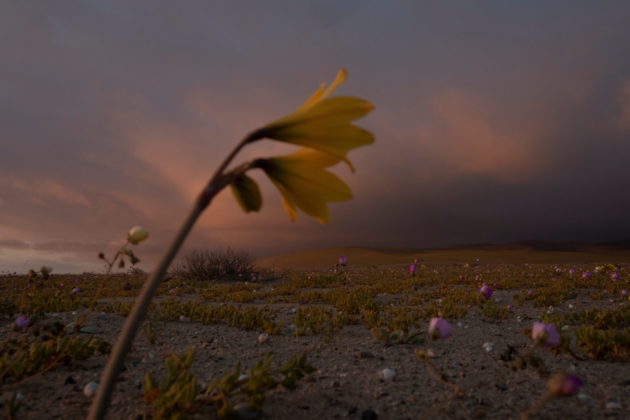 FILE PHOTO: A view of the Atacama desert partially covered with flowers during 'Desierto Florido' (Bloomed desert), a natural phenomenon that fill with flowers and plants the driest desert in the world and takes place during spring, near Copiapo, Chile, October 13, 2021. Picture taken October 13, 2021. REUTERS/Pablo Sanhueza

SANTIAGO (Reuters) – The sand dunes of Chile’s Atacama are once again bathed in vibrant colors following the sprouting of flowers in recent weeks in the world’s most arid desert despite a persistent drought.

The impressive vistas of the so-called flowering desert attract local and foreign visitors each spring in the southern hemisphere, depending on the amount of rainfall received in the winter season.

“This is a natural laboratory, because it lets you see how changes in rainfall affect plant diversity,” said biologist Andrea Loaiza during a tour of the area.

Resistant seeds and bulbs are able to survive Atacama’s extremely dry weather until they flower during the spring.

“If you pick some oil, you’ll find thousands of seeds, thousands of bulbs,” said Gina Arancio, a botanist with the local Universidad de La Serena. She explained that those seeds and bulbs – known collectively as germopolasm – are able to survive during many years even if there is no rain.

Still, while the area is officially protected and people are only allowed to go into designated areas, it is common to see deterioration caused by the transit of vehicles. The threat of plant trafficking is present as well.

Biologist Cesar Pizarro said that the area has tended to receive less and less rainfall over time, with the exception of the years 2007 and 2011.

“Even though the rain is restricted to a small area, it is still impressive to see it in the planet’s most arid desert,” he said.

The water deficit has led to studies in the region that seek to understand the impact that climate change has had over local plant species, as well as the plants’ ability to survive and adapt to the drier environment.