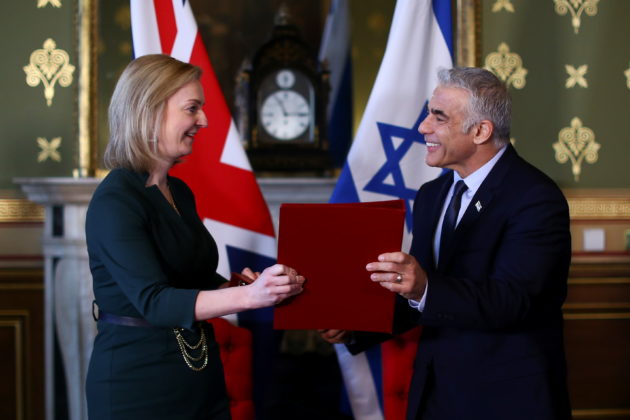 LONDON (Reuters) – Israel urged world leaders to keep up pressure on Iran and not lift sanctions as part of nuclear negotiations that were set to resume in Vienna on Monday, saying that tighter supervision of Tehran was needed.

Negotiators were to convene in a last-ditch effort to salvage a 2015 nuclear deal abandoned three years later by the United States under then-President Donald Trump, who then reimposed sweeping U.S. sanctions on Iran. That led to breaches of the deal by Tehran, and dismayed the other powers involved.

Israel has warned that Iran, its arch-enemy, will try to secure a windfall in sanctions relief at the talks, without sufficiently rolling back nuclear bomb-making potential through its accelerating enrichment of uranium.

Israeli Foreign Minister Yair Lapid, speaking in London alongside his British counterpart Liz Truss, said Iran was only attending the talks because they wanted access to money.

“This is what they have done in the past. And this is what they will do this time as well. The intelligence is clear, it leaves no doubt,” he told reporters after signing a Memorandum of Understanding on trade, technology and defense with Britain.

“A nuclear Iran will thrust the entire Middle East into a nuclear arms race; we will find ourselves in a new Cold War. But this time the bomb will be in the hands of religious fanatics who are engaged in terrorism as a way of life,” Lapid said.

“The world must prevent this and it can prevent this: tighter sanctions, tighter supervision, conduct any talks from a position of strength.”

In Jerusalem earlier on Monday, Israeli Prime Minister Naftali Bennett cautioned world powers to beware of what he described as Iranian “nuclear blackmail.”

Iran says it is enriching uranium solely for civil uses.

“As far as I am concerned, these talks are the last opportunity for the Iranians to come to the table and agree the JCPOA…,” she said, referring to the 2015 deal. “We will look at all options if that doesn’t happen.”

(Reporting by Paul Sandle in London and Jeffrey Heller in Jerusalem; Editing by Mark Heinrich)