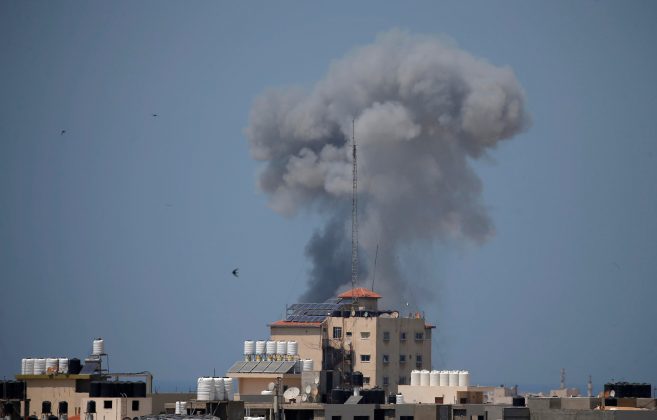 GAZA (Reuters) – The Israel-Gaza border fell quiet on Wednesday under an Egyptian-brokered ceasefire after the most intense flareup of hostilities between Palestinian militants and Israel since a 2014 war.

Militants from Hamas, the dominant group in Gaza, and Islamic Jihad fired dozens of rockets and mortar bombs at Israel throughout Tuesday and overnight, to which Israel responded with tank and air strikes on more than 50 targets in the enclave.

There were no reports of further fighting after Palestinian and Israeli attacks in the early hours of Wednesday, and both sides appeared to back away from a slide toward a new war after weeks of violence along the border.

Schools opened as usual in Israeli towns near the frontier where rocket warning sirens sounded frequently on Tuesday. Gaza’s streets were filled with morning shoppers and children went to class.

A Palestinian official said Egyptian mediation led to a ceasefire, but the terms of the “understanding” did not go beyond “a restoration of calm by both sides”.

“After the resistance succeeded in confronting the (Israeli) aggression … there was a lot of mediation in the past hours,” Hamas’ deputy chief in Gaza, Khalil al-Hayya, said, in a nod to Egypt’s efforts.

“An agreement was reached to return to the (2014) ceasefire understandings in the Gaza Strip. The resistance factions will abide by it as long as the Occupation does the same,” Hayya said in a statement, using militant groups’ term for Israel.

Israel stopped short of officially confirming any formal truce with Hamas and Islamic Jihad, which it regards along with the West as terrorist organizations.

But it launched no new attacks on Wednesday and signaled it was prepared to halt the hostilities if the cross-border barrages ended. Israeli officials declared that militants had been dealt a strong blow.

The Israeli army said three soldiers were wounded by projectiles launched from Gaza. There were no reports of Palestinian casualties in the Israeli strikes.

“Firing has stopped since the morning and Israel conveyed a message that if it resumes, the attacks on Hamas and its associates will be even stronger,” a senior Israeli official added.

Islamic Jihad spokesman Daoud Shehab, acknowledging a ceasefire was in effect, said its success would depend on “whether Israel will refrain from any military escalation against Gaza”.

Both Hamas and pro-Iran Islamic Jihad said they fired their salvoes in response to Israel’s killing of at least 116 Palestinians since March 30 in Gaza border protests.

Islamic Jihad had vowed revenge in response to Israeli tank shelling that killed of three of its men on Sunday after explosives were planted along the Gaza frontier fence.

Violence along the Gaza frontier soared in recent weeks. At least 116 Palestinians were killed by Israeli fire at mass demonstrations along the border, drawing international condemnation for Israel over its use of lethal force.

The demonstrations and surge in violence come amid growing frustration among Palestinians over the prospects for an independent state. Peace talks between Israel and the Palestinians have been stalled for several years and Israeli settlements in the occupied territories have expanded.

By late Tuesday, Israeli aircraft had hit 55 facilities belonging to militant groups in Gaza, including a cross-border tunnel under construction, in response to the Palestinian barrages, the military said.

Such potential targets are usually abandoned by militants when violence with Israel flares.

Israel said some 70 rockets and mortar bombs were fired from Gaza at its southland. Some were shot down by Israel’s Iron Dome rocket interceptor system and others landed in empty lots and farmland. One exploded in the yard of a kindergarten before it was due to open.