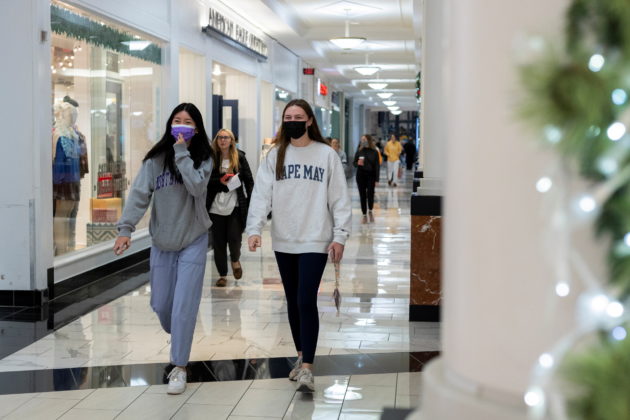 WASHINGTON (Reuters) – U.S. consumer confidence dropped to a nine-month low in November amid worries about the rising cost of living and pandemic fatigue, but that probably does not change expectations for stronger economic growth this quarter.

The survey from the Conference Board on Tuesday showed consumers less enthusiastic about buying a home and big-ticket items such as motor vehicles and major household appliances over the next six months. But consumers held strong views of the labor market, with the gap between those saying jobs are plentiful versus hard to get widening to a record high.

“This isn’t a cause for concern as the relationship between spending and sentiment is loose, particularly in the short-run,” said Ryan Sweet, a senior economist at Moody’s Analytics in West Chester, Pennsylvania. “The good news is that consumers’ assessment of the labor market improved in November, pointing toward further acceleration in job growth.”

The Conference Board said its consumer confidence index fell to a reading of 109.5 this month, the lowest reading since February, from 111.6 in October. The survey was conducted before the discovery of Omicron, a new COVID-19 variant, that was announced last week by South African scientists.

Economists polled by Reuters had forecast the index falling to 111.0. The measure, which places more emphasis on the labor market, has dropped from a peak of 128.9 in June. The fall was less than that of the University of Michigan’s survey of consumer sentiment, which dropped to a decade low this month.

Data this month have suggested that the economy was accelerating in the fourth quarter, with consumer spending surging in October. But the outlook for next year has been clouded by the Omicron variant, which has since been detected in several countries outside the southern African region.

Not much is known about how contagious or vaccine resistant the Omicron variant is. The Conference Board’s so-called labor market differential, derived from data on respondents’ views on whether jobs are plentiful or hard to get, jumped to a reading of 46.9 this month, the highest on record, from 43.8 in October.

This measure closely correlates to the unemployment rate in the Labor Department’s closely watched employment report.

Combined with declining new claims for unemployment benefits, it raises hopes that job growth accelerated further this month, though a shortage of workers remains a challenge. There were 10.4 million job openings at the end of September.

Consumers’ inflation expectations over the next 12 months surged to 7.6% in November from 7.1% last month. Federal Reserve Chair Jerome Powell told lawmakers on Tuesday that the higher prices were generally related to the pandemic, and warned that the risk of higher inflation had increased.

Stocks on Wall Street were trading lower on Powell’s inflation comments. The dollar rose against a basket of currencies. U.S. Treasury prices were mixed.

Buying intentions for motor vehicles fell as did plans to purchase household appliances, television sets and refrigerators over the next six months. But intentions to buy washing machines and clothes dryers rose.

The survey also showed consumers less inclined to buy a house over the next six months. Slowing demand could help to further cool house price inflation.

A second report on Tuesday showed the S&P CoreLogic Case-Shiller’s 20 metropolitan area home price index rose 19.1% on a year-on-year basis in September after advancing 19.6 %in August.

Signs that house price growth was moderating were evident in a third report from the Federal Housing Finance Agency that showed house prices rose 17.7% in the 12 months through September after powering ahead 18.5% in August.