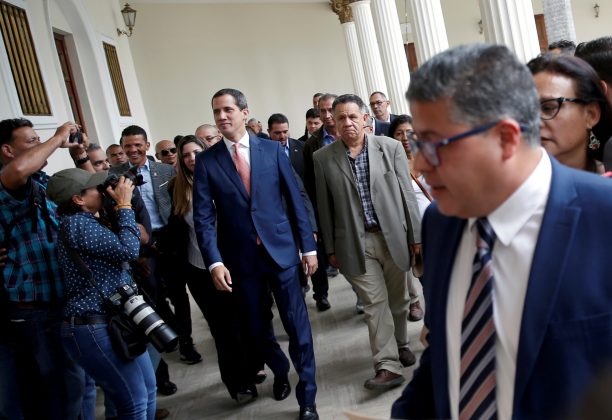 By Mayela Armas and Corina Pons

CARACAS (Reuters) – Allies of Venezuelan President Nicolas Maduro had discussed holding a presidential election in the coming months during talks to find a breakthrough in the country’s political crisis, four sources told Reuters on Monday.

Opposition politicians will travel to Washington to speak to U.S. officials this week, the sources said.

Maduro and a delegation representing opposition leader Juan Guaido have been meeting in Barbados as part of talks to resolve a political stalemate in the struggling OPEC nation that is suffering from a hyperinflationary economic collapse.

Guaido’s delegation had proposed a presidential vote in six to nine months on a number of conditions including changes to the elections council and supreme court, said the sources, who asked not to be identified because the talks are confidential.

The government had, in theory, agreed to a presidential vote on the condition that the United States lift economic sanctions, Maduro be allowed to run as the Socialist Party candidate, and that the vote be held in a year, one of the sources said.

However, the government has since pulled out of the talks to protest a new round of sanctions by Washington, and no new date has been set to resume the discussions, despite a visit by Norway foreign ministry officials – acting as mediators – seeking to revive them.

U.S. officials have expressed support for an election but without Maduro as a candidate, which may be a point of discussion, two of the sources said.

Venezuela’s information ministry, Norway’s foreign ministry and the U.S. State Department did not immediately reply to requests for comment.

Preparing the groundwork for an election requires a raft of changes to state institutions, including both the elections council and the supreme court – both of which have aggressively intervened in election processes to favor Maduro.

Another possible roadblock would be the existence of the Constituent Assembly, an all-powerful legislative body controlled by Socialist Party supporters that opposition leaders say could also intervene in any potential vote.