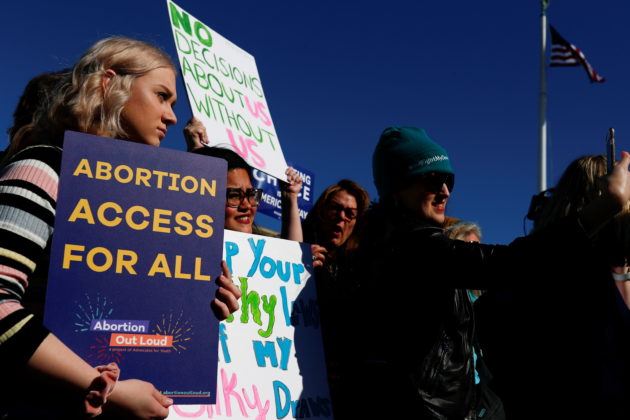 Pro-choice demonstrators hold up signs during a group chant outside of the U.S. Supreme Court as justices hear a major abortion case on the legality of a Republican-backed Louisiana law that imposes restrictions on abortion doctors, on Capitol Hill in Washington, U.S., March 4, 2020. REUTERS/Tom Brenner/File Photo

WASHINGTON (Reuters) – Just before midnight on Sept. 1, the debate over whether the U.S. Supreme Court’s conservative majority will dramatically change life in America took on a new ferocity when the justices let a near-total ban on abortion in Texas take effect.

The intense scrutiny of the court will only increase when the justices – six conservatives and three liberals – open their new nine-month term on Monday. They have taken up cases that could enable them to overturn abortion rights established in a landmark ruling 48 years ago and also expand gun rights – two cherished goals of American conservatives.

In addition, there are cases scheduled that could expand religious rights, building on several rulings in recent years.

These contentious cases come at a time when opinion surveys show that public approval of the court is waning even as a commission named by President Joe Biden explores recommending changes such as expanding the number of justices or imposing term limits in place of their lifetime appointments.

Some justices have given speeches rebutting criticism of the court and questions about its legitimacy as a nonpolitical institution. Its junior-most member Amy Coney Barrett, a conservative confirmed by Senate Republicans only days before the 2020 presidential election, said this month the court “is not comprised of a bunch of partisan hacks.”

“There’s no doubt that the court’s legitimacy is under threat right now,” lawyer Kannon Shanmugam, who frequently argues cases at the court, said at an event organized by the conservative Federalist Society. “The level of rhetoric and criticism of the court is higher than I can certainly remember at any point in my career.”

The court’s late-night 5-4 decision not to block the Republican-backed Texas law banning abortions after six weeks of pregnancy put abortion-rights advocates including Biden on high alert.

The justices now have a chance to go even further. They will hear a case on Dec. 1 in which Mississippi is defending its law banning abortions after 15 weeks of pregnancy. Mississippi’s Republican attorney general is asking the court to overturn the 1973 Roe v. Wade ruling that legalized abortion nationwide and ended an era when some states banned it.

In another blockbuster case, the justices could make it easier for people to obtain permits to carry handguns outside the home, a major expansion of firearms rights. They will consider on Nov. 3 whether to invalidate a New York state regulation that lets people obtain a concealed-carry permit only if they can show they need a gun for self-defense.

Former President Donald Trump was able to appoint three conservative justices including Barrett who tilted the court further rightward, with the help of maneuvering by a key fellow Republican, Senator Mitch McConnell.

The Democratic-led Congress has held two hearings in recent months on how the court has increasingly decided major issues, including the Texas abortion one, with late-night emergency decisions using its “shadow docket” process that lacks customary public oral arguments.

“The Supreme Court has now shown that it’s willing to allow even facially unconstitutional laws to take effect when the law is aligned with certain ideological preferences,” Democrat Dick Durbin, the Senate Judiciary Committee’s chairman, said on Wednesday.

Conservative Justice Samuel Alito in a speech on Thursday objected to criticism that portrays the court’s members as a “dangerous cabal that resorts to sneaky and improper methods.”

“This portrayal feeds unprecedented efforts to intimidate the court or damage it as an independent institution,” Alito said.

Conservative Justice Clarence Thomas last month said judges are “asking for trouble” if they wade into political issues. Thomas has previously said Roe v. Wade should be overturned, as many conservatives have sought.

Liberal Justice Stephen Breyer noted in a May speech that the court’s legitimacy relies in part on avoiding major upheavals in the law when people have come to rely on existing precedents.

“The law might not be perfect but if you’re changing it all the time people won’t know what to do, and the more you change it the more people will ask to have it changed,” Breyer said.

Abortion rights advocates have cited the fact that Roe v. Wade has been in place for almost a half century as one reason not to overturn it.

Breyer, at 83 the court’s oldest member, himself is the focus of attention. Some liberal activists have urged him to retire so Biden can appoint a younger liberal who could serve for decades. Breyer has said he has not decided when he will retire.

“What the justices have said they want to do is decide each case on the rule the law,” Mascott said. “I don’t think they should be thinking that the perception would be that they are too partisan one way or another.”

(Reporting by Lawrence Hurley and Andrew Chung; Editing by Will Dunham and Scott Malone)