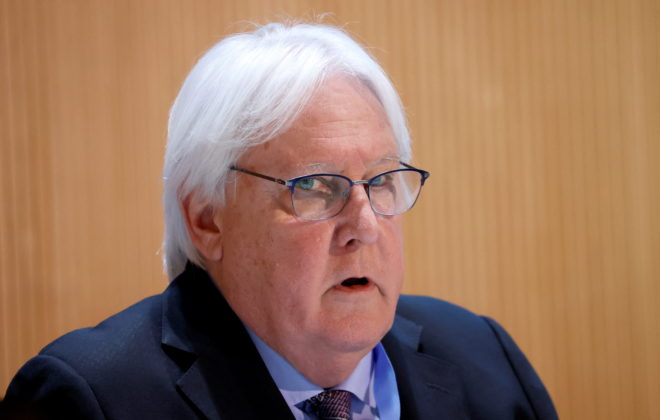 (Reuters) -A senior U.N. official called on Myanmar authorities to investigate the reported killing of at least 35 civilians that opposition activists blamed on government soldiers, saying he was “horrified” at the violence.

The ruling military has not commented on the killings near Mo So village in Kayah State on Friday and several calls since Saturday to junta spokesman Zaw Min Tun went unanswered.

State media reported on Sunday that soldiers had fired on and killed an unspecified number of “terrorists with weapons” in the village. It did not say anything about civilians.

U.N. Under-Secretary-General for Humanitarian Affairs and Emergency Relief Coordinator Martin Griffiths said there were credible reports the civilians, including at least one child, were forced from vehicles, killed and burned. He did not elaborate on why he considered the reports credible.

“I am horrified by reports of an attack against civilians… I condemn this grievous incident and all attacks against civilians throughout the country, which are prohibited under international humanitarian law,” he said in a statement.

Griffiths called for “a thorough and transparent” investigation so the perpetrators could be brought to justice.

The Save the Children aid group said two of its workers, travelling to their home villages for the year-end holiday, had been killed by the Myanmar military in the attack. It suspended operations in Kayah State and parts of neighboring Karen State and the Magway region.

The two staff were both new fathers who were passionate about educating children, the group said in a statement on Tuesday, adding that violence against civilians was intolerable.

“The UN Security Council must convene as soon as possible to set out the steps they will take to hold those responsible to account,” chief executive Inger Ashing said.

“We will continue to press for accountability for the perpetrators of the ongoing campaign of violence against the people of Burma,” it said, using another name for the country.

Two residents and the Karenni Human Rights Group, which operates in the area, said soldiers had killed more than 30 civilians.

They said details were sketchy but it appeared the victims had been in vehicles, including at least one truck, that were stopped on a road. They were killed and the bodies set ablaze, the residents and the rights group said.

A villager who declined to be identified for security reasons said he knew there had been a fire at the site on Friday but could not go there as there was shooting.

“I went to see this morning. I saw dead bodies that had been burnt and also the clothes of children and women spread around,” he told Reuters by phone on Saturday.

Photographs posted by the rights group showed charred bodies, some in the back of a burned-out truck. Reuters was not able to independently verify the authenticity of the pictures.

Myanmar has been in turmoil since the military on Feb. 1 overthrew the elected government of Nobel Prize laureate Aung San Suu Kyi.

Some opponents of the military have taken up arms, some linking up with ethnic minority guerrillas who have for years been fighting the government for self-determination in various parts of the country, including Kayah State in the east.

The killings and burning of bodies in Kayah State followed similar violence in the central Sagaing region on Dec. 7 when villagers said soldiers rounded up 11 people, shot them and then set fire to their bodies.

The military government has not commented on that incident.

Since Myanmar’s military launched the coup, more than 1,300 people have been killed in crackdowns on protests and more than 11,000 have been jailed, according to a tally by the Association for Assistance of Political Prisoners rights group.

Fighting has also flared in Karen State, also in the east, between the army and the Karen National Union (KNU) insurgent group.

Thai authorities say more than 5,000 villagers from Myanmar have fled across a border river to the safety of Thai territory since Dec. 16.