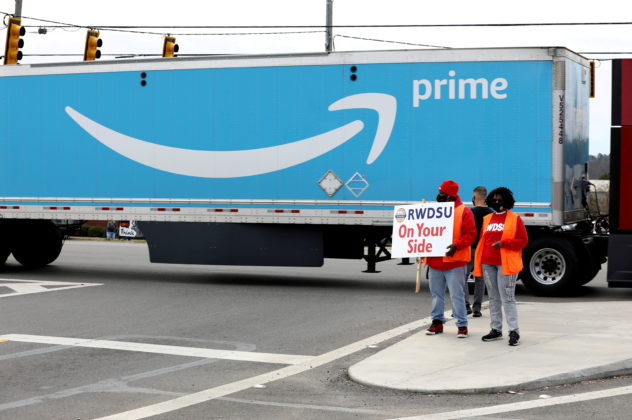 FILE PHOTO: People hold a banner at the Amazon facility as members of a congressional delegation arrive to show their support for workers who will vote on whether to unionize, in Bessemer, Alabama, U.S. March 5, 2021. REUTERS/Dustin Chambers

WASHINGTON (Reuters) – President Joe Biden will sign an executive order on Monday that will create a task force to promote labor organizing, the White House said, at a time when just over 6 percent of U.S. private-sector workers belong to unions.

The White House task force will be headed by Vice President Kamala Harris and Labor Secretary Marty Walsh will serve as vice chair of the group.

“The President and Vice President believe that the decline of union membership is contributing to serious societal and economic problems in our country,” the White House said in a fact sheet.

“Widespread and deep economic inequality, stagnant real wages, and the shrinking of America’s middle class are all associated with the declining percentage of workers represented by unions.”

The White House referred to the National Labor Relations Act, which was passed in 1935, to encourage worker organizing. “In the 86 years since the Act was passed, the federal government has never fully implemented this policy.”

Biden’s executive order specifically directs the task force to come up with a set of recommendations within 180 days to address two key issues: How existing policies can promote labor organizing in the federal government, and looking at new policies that are needed and the associated regulatory challenges.

The task force’s goals include facilitating worker organizing around the country, increasing union membership and addressing challenges to labor organizing in underserved communities.

Over 65 percent of Americans approve of unions, the most since 2003, according to a 2020 Gallup poll, despite the much lower membership rate.

Organized labor faced one of its biggest setbacks in recent history after an organizing drive at an Amazon.com facility failed earlier this month.

(Reporting by Nandita Bose in Washington; Editing by Dan Grebler)