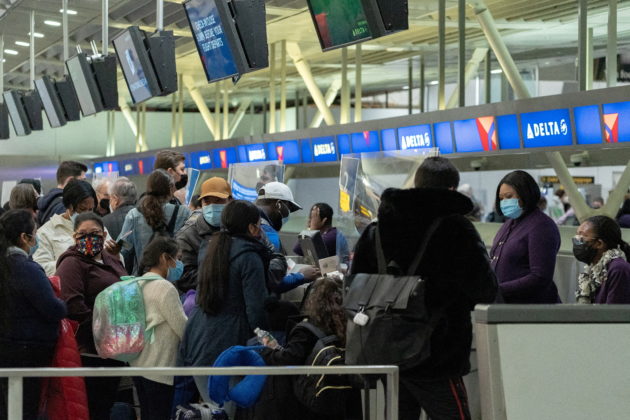 By Gabriella Borter and Aishwarya Nair

Rising infections from the Omicron variant forced airlines to cancel flights as pilots and cabin crew fell sick and needed to quarantine.

A total 1,130 flights into, within or out of the United States were canceled by Monday afternoon, according to the flight tracking website flightaware.com. Airlines said the virus and bad weather both were to blame.

The average number of new COVID-19 cases in the United States has risen 55% to over 205,000 per day over the last seven days, according to a Reuters tally.

“That is just another one of the requirements that I think is reasonable to consider,” Fauci, the nation’s top infectious disease official and a member of the White House COVID-19 response team, told MSNBC in an interview.

U.S. President Joe Biden, speaking to reporters on Monday, declined to say whether he endorsed a vaccine mandate for domestic air travel.

He did say he was open to reducing quarantine times for other Americans after the Centers for Disease Control and Prevention (CDC) last week said healthcare workers could isolate for seven instead of 10 days.

In another instance of Omicron-induced travel misery, the CDC said on Monday it was investigating 68 cruise ships after reports of COVID-19 cases on board.

On Monday, snowy weather in the Pacific Northwest was also part of the reason for more than 90 canceled flights that were due to land at Seattle-Tacoma Airport.

A representative for Alaska Airlines, which canceled more than 140 flights on Monday due partly to snowy conditions in Seattle, told a passenger on Twitter that it would be hours before someone from customer service could speak by phone, signaling the extent to which airline phone lines were overwhelmed with frustrated passengers.

“The hold time is about 7 hours. I am so sorry,” Alaska Airlines wrote on Twitter in response to a customer complaint.

Harley Garner, a 27-year-old creative strategist from Portland, and his brother from Seattle were staying with their parents in Pahrump, Nevada, over the holidays and had planned to fly home on Sunday evening. Both brothers’ respective flights -to Portland via Alaska Airlines and to Seattle via Allegiant Airlines – were canceled on Sunday afternoon. Both managed to book seats on later flights – Garner’s brother got one late Sunday night, and Garner booked one for 6 a.m. on Monday.

Then their second flights were canceled. They decided to drive and got on the road shortly after 3 a.m. on Monday. Garner’s father was driving his sons to Bakersfield, California, where they planned to rent a car and then drive up to Portland and Seattle, totaling some 17 hours on the road.

Garner said the most frustrating part of the travel nightmare, which Alaska Airlines said was weather-related, although Portland was not experiencing severe weather on Monday, was the last-minute notification of cancellations.

“If you know a plane isn’t going to leave one place and that’s a connector flight, then just cancel that flight,” he said. “Don’t play these games like you don’t know that there’s a staff shortage because of the coronavirus.”