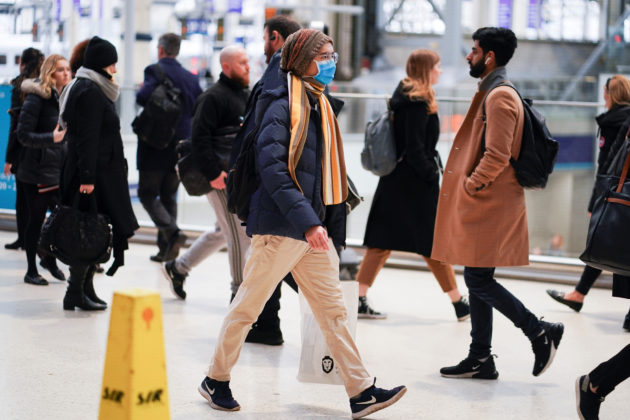 A man wearing protective face mask walks through Waterloo station, as the number of coronavirus cases grow around around the world, in London, Britain, March 10 2020. REUTERS/Henry Nicholls - RC2XGF9YGP56

BARCELONA (Thomson Reuters Foundation) – The global outbreak of coronavirus will impinge on people’s freedom and other human rights but steps must be taken to stop “unacceptable behaviour” including discrimination and racial attacks, said the head of a European human rights watchdog.

Michael O’Flaherty, director of the European Union Agency for Fundamental Rights, said he was shocked when a waiter told him the best way to tackle coronavirus would be to stop migrants coming into his country because they have poor hygiene.

He noted other media reports of people being beaten up in the street for looking Chinese and others stopped at airports based on similar prejudices around ethnicity.

The U.N.’s children’s agency UNICEF on Wednesday also said that fear of the virus was contributing to “unacceptable” discrimination against vulnerable people, including refugees and migrants, and it would “push pack against stigmatisation”.

O’Flaherty said it was necessary for public health responses to limit human rights to stem the coronavirus spread, but warned governments should not “use a sledgehammer to break a nut”.

“It’s about doing just enough to achieve your purpose and not an exaggerated response,” he added.

His Vienna-based agency, which advises EU and national decision makers on human rights issues, is working with teams of researchers across the European Union to prepare a report this month on ways to protect rights in a time of global turmoil.

“I am not saying everything that’s being done there is wrong … but there is an impact: a reduction in the enjoyment of human rights,” he said.

The World Health Organization described the coronavirus outbreak as a pandemic on Wednesday, with its chief urging the global community to redouble efforts to contain the outbreak.

As well as curtailing people’s freedom of movement, O’Flaherty said there was bound to be a ripple effect from the virus that has so far infected more than 119,000 people and killed nearly 4,300, according to a Reuters tally.

This would range from poor children being deprived of their main daily meal as schools closed, to gig economy workers being laid off with little access to social welfare, he noted.

In response, some governments – from Britain to Ireland and Spain – have introduced measures to boost social security payments or help small businesses stay afloat.

Governments may also need to tackle price inflation and profiteering from in-demand medicines and equipment like face masks, as well as ensure equal access to any treatments or vaccines that may be developed in future, he added.

Extra care was required to protect marginalised social groups from the virus, such as the homeless and refugees living in crowded conditions without decent shelter or healthcare.

O’Flaherty urged states to cooperate and learn from each other’s experiences while urging the private sector to do its bit, for example, by clamping down on hate speech and fake news on social media or attempts to market false cures.

If dealt with in the right way, the coronavirus epidemic could help Europeans understand the importance of safeguarding human rights for everyone, especially in tough times, he said.

“My feeling is that if we engage this crisis smartly, it can be an opportunity to help promote the sense, across our societies, that human rights is about all of us,” he said

(Reporting by Megan Rowling @meganrowling; editing by Belinda Goldsmith; Please credit the Thomson Reuters Foundation, the charitable arm of Thomson Reuters, that covers the lives of people around the world who struggle to live freely or fairly. Visit http://news.trust.org/climate)