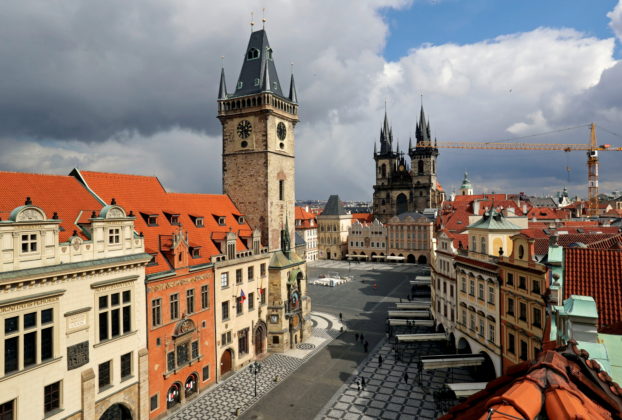 FILE PHOTO: A clock showing the time at noon is pictured on a building, next to almost empty streets at Old Town Square during the coronavirus disease (COVID-19) outbreak, in Prague, Czech Republic, March 31, 2020. REUTERS/David W Cerny

PRAGUE (Reuters) -The Czech Republic and Slovakia banned unvaccinated people from hotels, pubs, hairdressers and most public events from Monday after COVID-19 cases filled hospitals’ intensive care wards, with most of the seriously ill patients not inoculated.

The central European neighbors both adopted the new measures last week, a step behind Austria which first set restrictions on unvaccinated people but went for a full lockdown on Monday as the region experienced the world’s latest hotspot.

Slovakia has the bloc’s third-lowest rate at 46.8%, according to European Centre for Disease Prevention and Control (ECDC), while 60% of the Czech population has at least one dose of the vaccine.

Debate over a possible return to lockdown measures for both vaccinated and unvaccinated is growing, with Slovak news website Dennik N reporting the government could debate a proposal at a Wednesday meeting, following Austria.

Slovakia’s ruling coalition could be split however, and in the Czech Republic, ruling politicians have spoken out against a lockdown even as the Czech Medical Chamber called for one.

Many businesses fear a return to harsher restrictions like a year ago when most shops and restaurants had to close doors in the run-up to Christmas holidays.

“I believe that we are going into another lockdown… so this Christmas will be very similar to the last one,” Jakub Olbert said at one of the seasonal markets in Prague he organizes and supplies.

He said the number of vendors at other Christmas markets had already been halved by distancing requirements, hitting business.

The Czech government was due on Monday to discuss calling a state of emergency, allowing it to order medical students to help at strained hospitals where soldiers have already been dispatched in some places. The state of emergency framework could also be used for any possible lockdown later.

Under new measures, only people who have been vaccinated or who have recovered from COVID-19 in the past six months can visit restaurants, hotels, services or public events like sports games.

In large parts of Slovakia, the government ordered restaurants to close to all inhouse meals and serve-take out meals only, as well as restricting access to services for the unvaccinated.

Analysts have so far said the economic hit from the new Czech restrictions could be limited.

Vaclav Starek, president of the country’s Association of Hotels and Restaurants, said the main thing was keeping businesses running even if they need to face limitations.

The COVID-19 surge in the Czech Republic comes amid a transfer of power after an October election although both the outgoing and incoming administrations have spoken against lockdowns, especially of schools.

A demonstration against any form of lockdown was planned outside Prague Castle on Monday.