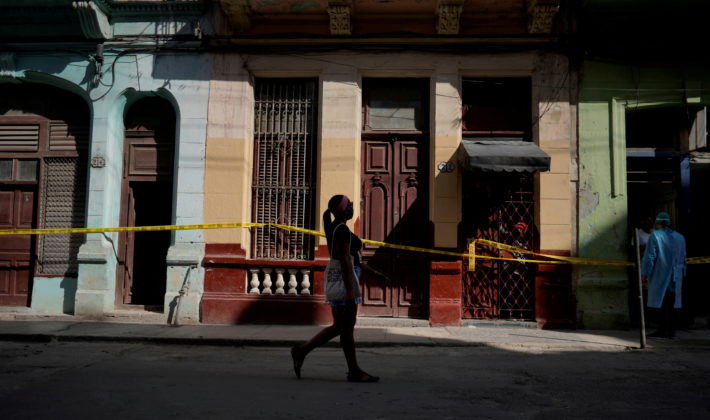 FILE PHOTO: A woman walks past houses in quarantine amid concerns about the spread of the coronavirus disease (COVID-19), in Havana, Cuba, April 8, 2021. REUTERS/Alexandre Meneghini

HAVANA (Reuters) – Cuban state media said on Friday that the intermittent blackouts that have plagued the island since June are caused by an aging power infrastructure and lack of proper maintenance and cautioned that residents should be prepared for more in the coming months.

The power outages reflect a deepening economic crisis that began with harsh new U.S. sanctions in 2019 and worsened with the pandemic, exposing such vulnerabilities as a decaying infrastructure and dependence on foreign currency from tourism and remittances to purchase food, medicine, raw materials and spare parts.

“No one should think the problem will be solved quickly,” Energy and Mining Minister Livan Arronte Cruz was quoted as stating during a discussion of the power grid with other officials broadcast by state-run television on Thursday evening.

The participants said Cuban power plants averaged 35 years of age, with a backup system of hundreds of smaller generators at least 15 years old and that just 5% of power came from alternative energy sources.

The blackouts bring back memories of the post-Soviet depression of the 1990s, when lights were off more than they were on due to fuel shortages. Nowadays, the outages are not a daily occurrence, rarely last longer than four hours and are due to infrastructure failure.

The minister and other energy officials have appeared frequently to explain the power situation since a day of protests over living conditions swept the country on July 11, sparked in part by blackouts.

The government explanations offered on Thursday included how and why power outages were carried out, details on specific neighborhoods and how citizens can help by doing little things like turning off a single light or opening their refrigerators less often.

Cuba’s economy declined 10.9% last year and 2% through June this year compared with the same period in 2020, after years of stagnation.

Cubans have withstood more than 18 months of pandemic lockdowns, food and medicine shortages, long lines to purchase scarce goods, high prices and more. With tourism hurting and other vital sources of jobs and funds closed down, the blackouts have only added to the pain and frustration.

Edier Guzman Pacheco, director of power plants on the Communist-run Caribbean island, was quoted as stating during Thursday’s broadcast that the crisis meant funds were scarce for maintenance and that work on two new generators was delayed after suppliers canceled contracts due to new Trump-era U.S. sanctions. This, he said, was leading to lower than capacity output and frequent breakdowns.

“Of the 20 thermo generators in the country, 18 are overdue for light or partial maintenance and 16 capital maintenance,” he said.

Minister Arronte Cruz made no promises as the broadcast concluded except that residents would be kept informed. He said the country was doing everything it could under the circumstances to avoid blackouts and that there were plans in the medium to long term to increase capacity and alternative energy sources.

“No one should think we are doing this intentionally to annoy the people,” he said.

(Reporting by Marc Frank in Havana; Editing by Matthew Lewis)