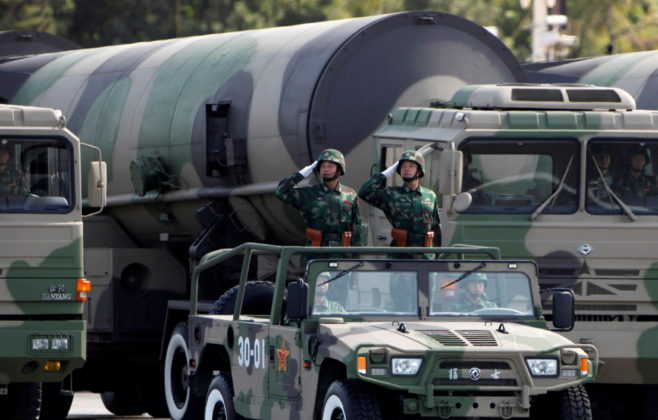 FILE PHOTO: People's Liberation Army (PLA) soldiers salute in front of nuclear-capable missiles during a massive parade to mark the 60th anniversary of the founding of the People's Republic of China in Beijing October 1, 2009. REUTERS/David Gray/File Photo

WASHINGTON (Reuters) – China, in the midst of a rapid nuclear weapons buildup, will soon surpass Russia as the United States’ top nuclear threat, a senior U.S. military official said on Friday, warning that the two countries have no mechanisms to avert miscommunication.

U.S. Air Force Lieutenant General Thomas Bussiere, the deputy commander of the U.S. Strategic Command, which oversees the country’s nuclear arsenal, said China’s development of nuclear capabilities “can no longer be aligned” with its public claim that it wants to maintain a minimum nuclear deterrent.

He said the determination would not be based solely on the number of Beijing’s stockpiled nuclear warheads, but also on how they are “operationally fielded.”

“There will be a crossover point, we believe, in the next few years,” Bussiere said.

Unlike with Russia, the United States did not have any treaties or dialogue mechanism with China on the issue to “alleviate any misperceptions or confusion,” he added.

Bussiere’s comments come as the United States is attempting to realign its foreign policy to put greater emphasis in the Indo-Pacific region to counter China’s growing economic and military might.

Think-tank reports based on satellite imagery say China appears to be constructing hundreds of new silos for nuclear missiles, and Washington has accused Beijing of resisting nuclear arms talks.

China says its arsenal is dwarfed by those of the United States and Russia, and that it is ready for dialogue, but only if Washington reduces its nuclear stockpile to China’s level.

In a 2020 report to Congress, the Pentagon estimated China’s operational nuclear warhead stockpile to be in “the low 200s,” and said it was projected to at least double in size as Beijing expands and modernizes its forces.

According to a State Department fact sheet, the United States had 1,357 nuclear warheads deployed as of March 1.

China’s advances in missile technology to deliver those warheads are also a concern for the United States, and Bussiere said China last year tested more ballistic missile capabilities than the rest of the world combined.

(Reporting by Michael Martina in Washington; Editing by Matthew Lewis)