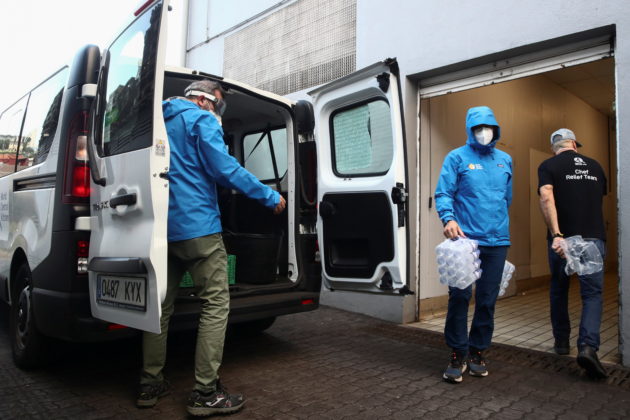 Pablo Pais and Fernando Quindos, volunteers of NGO World Central Kitchen, upload supplies into a van before delivering them to emergency workers in a controlled area in Los Llanos de Aridane as the Cumbre Vieja volcano continues to erupt on the Canary Island of La Palma, Spain, October 14, 2021. REUTERS/Sergio Perez

By Silvio Castellanos and Sergio Perez

LA PALMA, Spain (Reuters) – Working in close proximity to the red-hot lava flowing from a volcano on the Spanish island of La Palma, emergency workers anxiously await their lunch break – and while any food would do, it tastes better when it comes from a celebrity chef’s kitchen.

“Although there are so many of us, it seems like there’s a lack of personnel … including those who come down to give us a sandwich! It seems silly but after eight hours on the ground it’s fundamental,” said Captain Diego Ortiz of the Guardia Civil police force.

Arriving in one of the emptied neighborhoods in a van, WCK volunteer Pablo Pais told Reuters: “The lava’s very close. Until the day before yesterday there were still people in these houses.”

The non-profit started cooking 200 meals a day early in the eruption – which began on Sept. 19 – and is now making 1,400, with the amount growing daily, said Olivier de Belleroche, a 45-year-old chef from Madrid who works for WCK.

After the director of a local hotel suggested using up all the hotel’s food stocks as creeping lava threatening to cut off power lines, WCK and its partners organized a large convoy of food for the military, rescue workers and evacuees, he said.

“It’s very emotional, that sense of constantly being on the alert, so many people losing their homes,” Belleroche mused after pulling a tray packed with dozens of sealed hot meals out of the oven in a bustling kitchen ceded by a supermarket chain.

“You grow more involved with the people – I’ve been doing this for four weeks now,” he added, explaining that initially he had come just for a few days.

WCK head Andres is known for his innovative cooking and credited with popularizing tapas in America in the 1990s.

He has recently partnered with the Archewell charity of Britain’s Prince Harry and his wife Meghan Markle to set up a series of community relief centres in disaster-stricken areas around the world.