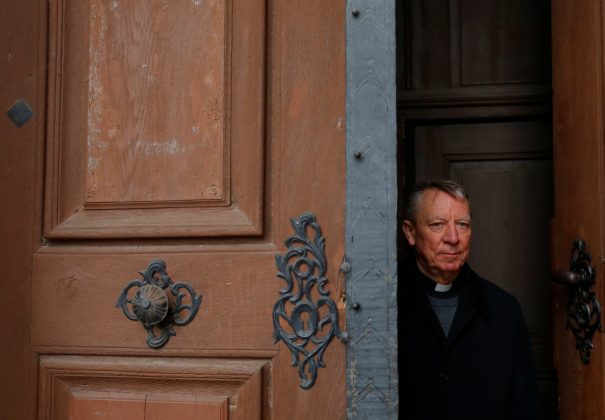 Miklos Beer, the bishop of Vac, stands at the gates of the cathedral in Vac, Hungary March 9, 2017. REUTERS/Laszlo Balogh

VAC, Hungary (Reuters) – Hungarians should overcome prejudice and help refugees to settle in the country, the Catholic bishop of Vac said trying to ease a hostile attitude towards migrants.

Miklos Beer, whose comments are a rare show of support for migrants among high clergy in Hungary, has backed up his stand by housing two asylum-seekers from Afghanistan and one from Cuba in his church quarters situated in the quaint town north of Budapest.

Now the 73-year old bishop is afraid that under a new law passed last week, they will be taken to container camps on Hungary’s border with Serbia, where all migrants will be detained until their asylum requests are processed. Migrants whose applications are not immediately approved will not be allowed to move freely around Hungary.

Prime Minister Viktor Orban has been a vocal opponent of the wave of migration into Europe, which he says threatens the socioeconomic makeup of the continent, and his government is now building a second barrier to keep migrants out.

“I still hope and I am convinced that even if we have a double fence (on the border), the door is still open,” Beer, who will soon celebrate his 14th Easter in Vac, told Reuters in an interview.

“It is up to us, and I have the entire Hungarian society in mind, that we should accept those who knock on the door, and should not humiliate them … but we should ensure that they feel at home here as soon as possible.”

Beer said he was following the teachings of Pope Francis.

The pontiff last month called for a radical change of attitude towards immigrants, saying they should be welcomed with dignity and denouncing the “populist rhetoric” he said was fuelling fear and selfishness in rich countries.

“When someone comes through the door, and based on the latest parliamentary decision … arrives in the transit zone (on the border) and asks for asylum, we should help those who get the refugee status,” Beer said.

“We should not have prejudices against them.”

Based on data from the immigration office, this year 51 migrants had been granted refugee or protected status.

A total of 1,920 asylum requests, some of them filed last year, had been rejected and 1,488 applications had to be terminated as asylum seekers had left Hungary. Last year Hungary received 29,432 asylum requests, but most people decided to move on to western Europe.

The office of the Catholic Church did not reply to emailed Reuters questions asking for an official statement on migrants.

Beer said he would continue to provide shelter and food for the three asylum seekers who he has put up for a month, but admitted he would not be able to prevent their transfer to a detention camp, if police came.

“I won’t have any means to stop that,” he said.