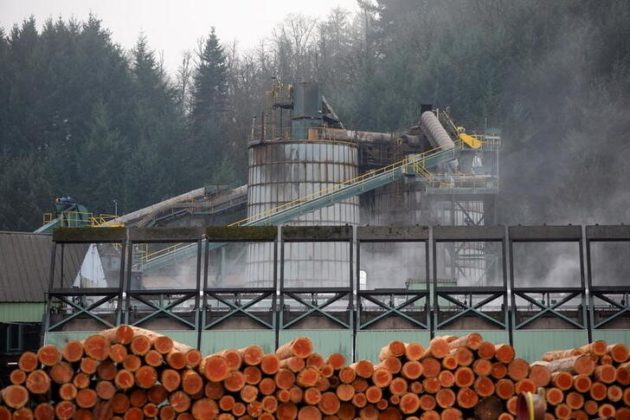 FILE PHOTO: Logs and lumber are stored at one of the Freres Lumber facilities in Lyons, Oregon, U.S., November 29, 2020. REUTERS/Alisha Jucevic

(Reuters) – North American timber producers are expected to see a dip in current-quarter profit after lumber demand for do-it-yourself home projects decreased following the easing of most restrictions that kept people in their houses.

Lofty lumber prices, the sustained needs of home builders and industrious homeowners during the pandemic pushed their second-quarter profit to record levels. But the DIY market, which accounts for 20% of lumber sales, is leveling.

Canada’s West Fraser Timber Co Ltd, Canfor Corp and Interfor Corp are projected to report combined earnings of about $803 million in the third quarter, according to Refinitiv estimates, about a third of what they posted in the second quarter.

However, lumber supply is expected to tick up as saw mill owners take advantage of recent bumper profits to build more mills and add workers, which will help ease a protracted labor shortage.

“Revival in supply and weak demand from renovations and the repair sector will put a lid on prices,” said Samuel Burman, commodities economist at Capital Economics.

Burman expects lumber prices to hover around $500 to $600 per thousand board feet for the rest of this year, with supply set to rise around 6% in 2021 compared to pre-pandemic levels.

In July, U.S.-based Weyerhaeuser Co said it expects third-quarter earnings to be “significantly” lower than the second. Canfor, which breezed past market expectations in the second quarter, hinted at future demand challenges in late July.

“The new supply will weigh on pricing,” said George Staphos at Bank of America (BofA) research, adding that some new equipment and capacity installations could go into 2022 and beyond.