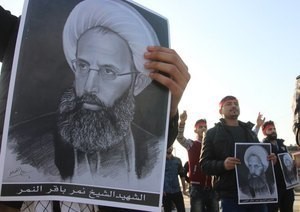 RIYADH (Reuters) – Since Saturday’s execution of four Shi’ite Muslims in Saudi Arabia, hundreds or thousands of the minority sect have marched nightly in protest, and their anger could herald wider unrest.

The execution of one of them, dissident cleric Nimr al-Nimr, caused an international crisis as Shi’ite Iran and its allies responded angrily, but it also caused upset in his home district of Qatif, where many saw his death as unjustified.

“People are angry. And they are surprised, because there were positive signals in the past months that the executions would not take place. People listen to his speeches and there’s no direct proof he was being violent,” a Qatif community leader said by phone.

The protests in Qatif, an almost entirely Shi’ite district of about a million people in the oil-producing Eastern Province, have been mostly peaceful, though a fatal shooting and gun attacks on armored security vehicles have also taken place.

Qatif is located near major oil facilities and many of its residents work for the state energy company, Saudi Aramco. Past incidents of unrest have not led to attacks on the oil industry, but a bus used by Aramco to transport employees was torched after a protest on Tuesday night.

Footage of marchers shouting “down with the Al Saud” and other anti-government slogans, corroborated by witnesses contacted by Reuters, is circulating on social media along with video clips showing shots fired at armored cars.

“I did not hear shooting last night, but I heard it a lot on the two nights before,” a resident of Nimr’s home village, al-Awamiya, told Reuters by phone. Like others Reuters spoke to in Qatif, he asked that his name be withheld.

Saudi Arabia only permits foreign news media, including Reuters, to visit Qatif if accompanied by government officials, which it says is to ensure journalists’ safety.

Whether the protests – and sporadic attacks on police – escalate may depend on whether the security forces continue an unspoken policy of allowing peaceful demonstrations until they die down, or crack down with force, say locals.

Government supporters say it depends rather on whether Tehran uses links to local activists, which both Iran and many Qatif residents deny exist, to stage attacks in retaliation for Nimr’s execution and Riyadh’s cutting of diplomatic ties.

The security forces believe they can quash any mass protests in Qatif, like those that began during the 2011 Arab Spring when Nimr became a figurehead, or the 1979 uprising inspired by Iran’s revolution, analysts say.

Qatif is almost entirely populated by Shi’ites and can be physically isolated by the government. Checkpoints stand at its main street entrances.

“The security forces are very confident. The Shi’ite population is confined in certain places. They are a small minority compared to a big majority. They think they have the capability to control them,” said Mustafa Alani, a security analyst with close ties to the Interior Ministry.

Shi’ites have long complained they face entrenched discrimination in a country where the semi-official Wahhabi Sunni school regards their sect’s beliefs as heretical. They say they face abuse from Wahhabi clerics, rarely get permits for places of worship and seldom get senior public sector jobs.

Those basic complaints have over the years been aggravated by what Qatif residents call a heavy security hand against their community, accusing the authorities of unfair detentions and punishments, shooting unarmed protesters and torturing suspects.

Reuters has met several Saudi Shi’ites detained after the 2011 protests who said they were repeatedly beaten and deprived of sleep to extract confessions of rioting.

The government denies discrimination against Shi’ites and bias or brutality on the part of its security services. Its supporters point to the blind eye police show frequent protests by Shi’ites in Qatif, which would be quickly crushed in any Sunni area, as evidence of leniency.

Riyadh’s relations with the Shi’ite minority are complicated by its rivalry with Iran, and by its own reliance on a largely Wahhabi population for support.

Analysts say the government sometimes uses a tough stance towards Saudi Shi’ites to mobilize its Wahhabi power base, while perceived weakness in acceding to any demands made by the minority can prompt anger that Sunni militants seek to exploit.

A series of Islamic State attacks in Saudi Arabia since November 2014 has mainly targeted the kingdom’s Shi’ites as part of an apparent strategy to leverage the sectarian divide as a way of building support among conservative Sunnis.

Such divisions are easier to aggravate because of the wider struggle between the kingdom and Iran, with many Saudis, and their government, seeing Tehran as using ties with Shi’ites across the Middle East to seek dominance and persecute Sunnis.

“The Iranians and their allies have been pushing and promoting terrorism and recruiting people, inciting and providing weapons and explosives to people, and Nimr al-Nimr was one of them,” Saudi Foreign Minister Adel al-Jubeir told Reuters in an interview this week.

During and after the 2011 protests, eight policemen and seven civilians were killed in attacks by Shi’ites that were connected to Iran and carried out by people linked to Nimr, Riyadh says.

Iran denies all those charges and Nimr’s family say he advocated peaceful change, took no part in violence and had no links to Tehran.

The police said Nimr was arrested when he fired on them with an assault rifle, injuring two, while trying to prevent the capture of another suspect, the act which most swayed judges to pass the death sentence on him, Alani said.

Nimr and the three other Shi’tes were executed on Saturday along with 43 Sunni al Qaeda convicts.

More young Shi’ites detained over the 2011 protests and subsequent attacks have been sentenced to execution. Others are also on trial and facing possible death sentences.

“I think people are worried. It might get worse. There is a feeling things might get complicated,” said a Shi’ite in Dammam, the capital of Eastern Province.