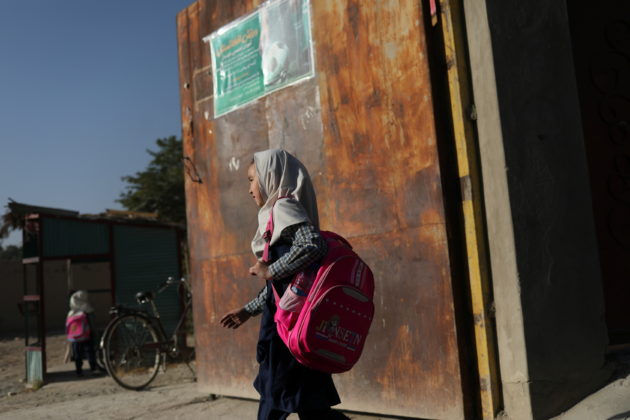 An Afghan girl goes to a school in Kabul, Afghanistan, September 18, 2021. WANA (West Asia News Agency) via REUTERS ATTENTION EDITORS - THIS PICTURE WAS PROVIDED BY A THIRD PARTY.

(Reuters) – As the weeks pass in Afghanistan, the new Taliban administration has yet to announce when it will re-open secondary schools for girls, leaving them stuck at home while their brothers return to class.

Two weeks since boys in classes above the sixth grade were told to go back to school, the government says it is working on making it possible for girls to do the same.

“I dreamt of becoming a top doctor to serve my people, my country, and my family and work in the community, but now it’s not clear what my future will be,” she added.

The issue has become increasingly important as the rest of the world, whose aid money Afghanistan desperately needs, tries to gauge whether the new Taliban government will give women and girls greater freedoms than the last time it was in power.

“The Ministry of Education is working hard to provide the ground for the education of high school girls as soon as possible,” Taliban spokesman Zabihullah Mujahid told a news conference on Sept. 21.

The ministry put a statement on its Facebook page on Sept. 24 saying no decision had been reached on when girls would be able to go to school, but that work on the issue was continuing and information would be shared as soon as possible.

Girls’ education and literacy rates, while still relatively low by world standards and well below the rates for boys, have risen sharply since the last Taliban government was ousted by a U.S.-led campaign in the wake of the Sept. 11 attacks.

But increasingly, foreign officials and rights activists including U.N. human rights chief Michelle Bachelet and Nobel Peace Prize winner Malala Yousafzai have warned that one of the biggest social gains of the past 20 years may be under threat.

Facing a potentially catastrophic economic crisis that will require large amounts of foreign aid, the movement has tried to present a conciliatory face as it seeks to gain international recognition for its government.

Officials say they will not repeat the harsh rule of the previous Taliban government toppled in 2001, which banned most girls’ education and forbade women from going out in public without a male guardian.

They say all rights for women and girls will be guaranteed in accordance with Islamic law. But they have not said when and under what conditions girls’ schools will be allowed to re-open.

“If our Taliban brothers want their government to be stable and the international community to recognize it, according to sharia, they should allow girls to study,” said Shaima Samih, a 57 year-old math teacher from Kabul.